The journalists are equipped with a GPS navigation device. Each time they visit a new location, they post their co-ordinates to the Twitter stream (e.g. this post). Our system then logs the coordinates and applies them to every photo, tweet and diary entry until the next location.

In addition to what you see in the browser, there are a number of gems hidden under the hood: microformats, geoRSS and an API. (Non-techie folk may happily skip this and proceed straight to comments :)

Microformats are new, developing standards for adding extra meaning to the HTML of a web page. They create all sorts of possibilities for software (from search engines to browsers) to interact with the content in innovative and useful ways.

The HTML for each Twitter, Flickr and diary post in the Bangladesh River Journey is written using the hAtom microformat. This means, for example, that an RSS feed can be generated directly from the HTML on the page.

If you use the Firefox browser, you can explore other microformats on the Bangladesh Boat site, with the excellent Operator extension. You’ll find xFolk bookmarks, geo locations, hCalendar events, hCard contacts, xoxo lists and tagged links:

The site’s RSS feed allows users to stay up-to-date with new posts, without needing to re-visit the site (we talked about using RSS in a previous post).

The feed is encoded with the geo coordinates of each post (this is called GeoRSS). Some interesting things can then be done with the feed, such as plotting it straight on to Google Maps: 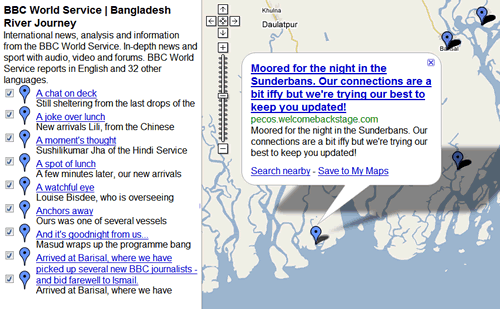 Part of the task was to build an API – a way for web developers to access the data in the system, to create their own mashup applications. This will be promoted through BBC Backstage – the BBC’s hub for exploring new media technology. More about this soon…

Update: We added KML as a data format to the API. This allows you, for example, to view the entire journey of posts in mapping applications like Google Earth.

It has been fantastic working with the BBC crew. Everyone has shown their good-nature and team-spirit… and nothing but excitement for exploring new forms of media in reporting events that matter to the world.

Our own team was:

With thanks to Toby Travis, for JavaScript inspiration.